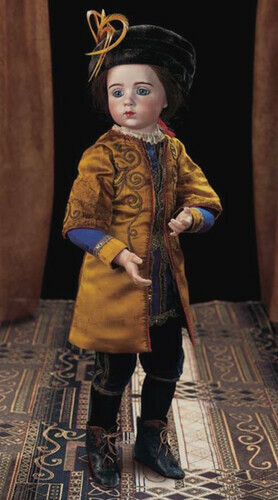 Click on the image to enlarge
Inquire about this work

A. Marque: A name that draws the attention from serious doll collectors worldwide. In this case, the prize fetched more than a quarter of a million dollars. Photos courtesy Theriault's. ATLANTA –A rare French doll sculpted by artist Albert Marque sold for $263,000 and set a new world record July 12 2009, at a Theriault’s auction during the United Federation of Doll Clubs’ national convention. The bisque doll, circa 1914, is one of 20 to 25 known to exist from a set of 100 commissioned by Marque (pronounced ‘mark’). The doll was intended for an exhibit on behalf of art patron Margaine-Lacroix in her Parisian boutique. The costume was carefully crafted from the finest Paris couture to represent a Russian male ballet performer. Theriault’s President Stuart Holbrook likened the A. Marque doll to what a Honus Wagner card would be to baseball collectors. “The A. Marque is the one name that carries the absolute allure for doll collectors all over the world,” Theriault’s President Stuart Holbrook told Antique Trader. “This doll is a dream blending of mystique, aesthetic and history. When those three essential combining factors come together you see record-breaking prices.” The doll drew heated bidding, shattering the previous record for a similar model sold in 2003 for $215,000. A prominent Boston collector, who was in attendance, eventually won the doll. At the international event held in Atlanta, Theriault’s, a 40-year firm based in Annapolis, Md., offered over 1,000 pieces at their auction held during the international convention. The crowd broke out in gasps and cheers as determined bidders drove the sale price higher and higher. All prices include buyer’s premium. Holbrook said he never questioned whether 2009 was the right year to bring the doll to auction. Given the world’s troubling economic climate, Holbrook knew the top of the market always commands top prices. He credits this to a changing attitude towards collecting in that quantity is out and quality is all that matters. “The very high end will always see high prices,” he said. “As any collector should be, one must be focused on their ability to get the best. A collection shouldn’t be about numbers. It should be about quality: the absolute best.” The Marque doll is composed from a five-piece mold and carries the distinction of being created by a noted French sculptor. The prominent definition of facial planes was achieved by a unique four-part mold. It gains its portrait-like appearance with an elongated, slender throat, blue glass paperweight inset eyes, painted lashes and original brunette human hair wig. The elaborate silk and velvet costume is suggestive of a late 18th century French court. The bottom of one foot still retains description, in pencil, of its costume. “It is a work of art more than a doll,” Holbrook said. “It was a whole new concept at the time.” The doll was part of a larger collection once owned by the Eredi Di Adriana Bracco family of Milan, Italy. - See more at: http://www.antiquetrader.com/antiques-news/french_doll_shatters_world_auction_record#sthash.OWWhMY70.dpuf